This blog post is very picture heavy, but believe it or not- there are many, many more on Flickr.

Moving right along from Elkhart, we were on our way to St. Louis. It's about 375 miles from point to point and honestly, that was more than we want to drive in a single day. With stops and whatnot, we have learned to plan for an overall average of 45mph. That means, 375 miles will take us a little over 8 hours of driving.

Having the flexibility and not wanting to have such a long day, we decided that we wanted to make it in two legs. The first leg was from Elkhart to Springfield, IL. We didn't actually know where we were headed for until we got onto the road. Kind of fun being able to drive without knowing the destination.

We did have some fun during the drive. First up, we drove past a sign for the "World's Largest Covered Wagon". This was our first goofy roadside attraction and we couldn't have been more excited. Silly, but fun.

We ended up at a campground called Double J. Pretty decent place- we were on a super long pull through that was mostly level. They had a cute "Route 66"-themed minigolf. And the people that we dealt with were all VERY friendly. A win-win. We didn't do much of anything while we were there- pizza from a local pizza shop as recommended by the campground (yummy) and Mandie made a Walmart run. We stayed from Sunday afternoon to Tuesday and then headed on down the road.

We stayed at the Casino Queen RV Park and it is just what it sounds like. An RV park that is part of the casino. It was a little expensive at $50/night. The sites were all blacktop pull-throughs. The "yards" were simply stone spots between the sites. There were no picnic tables or grills at the individual sites (however, there were a few pavilions and charcoal grills with them). You did have access to the indoor pool at the hotel. And a regular shuttle ran between the RV park, hotel, and metro stop. We used that quite a bit and actually didn't drive our truck a whole lot. There is a major rail/train depot of some sort just beyond the campground; the train noise was fairly non-stop all hours of the night and day. To be honest, I have mixed feelings on recommending it here or not given the nightly rate ($50+/night).

BUT, that view. The arch is in plain view of all of the sites. And that's just cool to me.

Our first order of business was actually going to see and up into the Arch. We took the shuttle to the metro stop.

From the Metro, we made our way to the Courthouse. At the Courthouse, we found that we had missed all of the tours for the day. But, we were still able to get tickets to go up the arch. And at the same time, the kids got their Junior Ranger books to work on for their badges.

It's a short walk from the Courthouse to the waterfront where the Arch is. The area was heavily under construction. I'm sure it'll be pretty when it is done but for now, it was a fenced-in paradise. However, the Arch was very cool in person. I don't know what I expected, but it is HUGE.

The designers of the arch had to invent an elevator that could follow the curvature of the arch. What they designed were "pods" that rotate within a fixed outer shell. So as you go up, the outer-shell rotates with the arch, but the inner pod stays upright at all times. However, due to the limited space of the arch itself, it was COZY. The door itself wasn't tall enough for me to walk through, you had to stoop and step in. My wife is fairly claustrophobic but she did alright.

Once at the top, it gave us a very cool view of the surrounding area. Being able to see the RV park and our camper was a nice treat. We spent a while looking around up there looking at all of the things around.

At the bottom of the Arch is supposed to be a wonderful museum. Unfortunately, most of it was closed for refurbishment. However, they did have a movie running about the making of the arch. The documentary was very informative and well done.

On our way out, we got the kids badged as Junior Rangers.

We stopped at the gift shop for some post cards and other trinkets. I learned a secret...

And then headed outside where the sun was setting. The arch is just as cool at night. You really can't help but get artsy with your photos.

I had heard fairly dire warnings about being in that part of Cincinnati after dark. We didn't have any issues, but keep your eyes open. The city was dead (it was a Tuesday night). We passed a few horse drawn carriages and one lady all but begged us to take a ride. We declined. Our sights were set on food. We were hungry! We had a fairly mediocre dinner at Caleco's Bar and Grill. Not bad, not great, just sort of good- but it was food and we were hungry.

A quick trip back on the metro (which now smelled terribly of pee). Apparently people aren't respecting the sign: 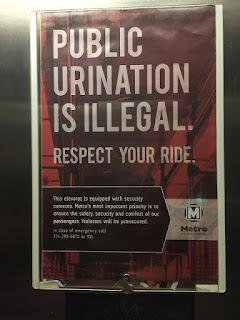 We spent a few days really doing nothing at the RV park. It's amazing how life just sort of happens. I worked, the kids were kids, and Mandie did her thing. I think it wasn't until Friday evening did we learn of another "attraction" and that is the Gateway Geyser. Interestingly enough, we saw the circular pond when we were up in the arch but didn't know what it was. Pretty impressive, though incredibly difficult to photograph on the drab day (white water on a gray sky).

Next up is the Cahokia Indian Mounds. This was one of those places that a few people had told me about but I didn't look into it. BUT- I committed to checking it out when we were in the area. Initially, I think Mandie thought I was nuts when we realized that we were going to see hills. Paige was extremely unimpressed when we first got there. However, by the time that we toured about 1/2 of their visitor center and then watched their movie- we all were pretty interested. I guess I forgot elementary school because I never really realized that there were Indian "cities". They described the area as fairly urban.

The mounds were built by workers carrying a backpack full of dirt at a time. When you stop and look back at the biggest of the mounds, it was one heck of an undertaking. Add to it that there were many of these mounds; I can't imagine the devotion of those doing it. Or the work that went into it.

Part of the same site was Woodhenge. Longest story shortest- it was a calendar. Most interesting to me, is that it was actually built more than once by the Indians. I can barely cut wood to be square with tools and guides.
After a fun-filled day of learning, there happened to be fireworks off in the distance from the campground.
Next up, our Sunday plan was to visit the St. Louis Zoo. It's free to get in, but a handful of attractions cost money. Knowing that many zoos offer reciprocal entrance if you have a membership, we bought a membership. It was cheaper than other zoos that we have been to and looked at costs for. This place was beautiful.

We wandered around the zoo, following our fearless leader:

Saw some monkeys do it like they do on the Discovery Channel (I'm sure it's just a piggy back ride...):

We rode the train:

Took in a Carousel Ride:

We then fed (or maybe just petted) stingrays. These tanks also have sharks!

After that, we wrapped up our day. It was pushing 6pm and while we didn't see everything, we saw a lot and were happy.

After all that, I am happy to say that we saved the best for last. We met up with our first Fulltime Family, Bunny and Eric Arnold. They were super sweet and talked to us for quite a while (all while we got eaten alive by mosquitoes!). It turns out that they were at Double J just before us, too. Unfortunately, they were leaving in the morning- but we had a nice chat and looked forward to catching up with them in Branson. No pictures of this meet up, but it happened and it was AWESOME!

Leaving from St. Louis, we headed to Branson, MO. Turns out that Branson bills itself as the "Live Entertainment Capital", but we weren't there for that. We were there for the Fulltime Families "NOT Back to School Rally"! More of that coming up...

As usually, there are many, many more photos on Flickr.
Posted by Doug S at 5:31 PM