(Sigh, blog backlog. This was written last week while we were still in Clermont. We've now moved onto Stone Mountain, GA and are even preparing to head out of here for Cincinnati!)

As before, this is only a smattering of photos. There are a TON more on Flickr.

It's kind of nice to not really know what to write other than, "SSDD" (aka same stuff, different day). We're still in the Disney area at the Thousand Trails Orlando (TTO) campground. For the next bunch of months, this will be the longest that we are at one spot. I have to admit, I'm about ready to get some road under our wheels and get moving!

However, being right outside of Disney means that we have gone on quite the Disney overload. We have spent a fair number of evenings and weekends at the parks. And, a first for us- we even went to one of their waterparks called Typhoon Lagoon.

Let me try to recap what has happened since we've been at TTO:

We had an evening visit to the Magic Kingdom. It was kind of nice to just go in for a couple of hours- do our Fast Passes and roll out.

It looks like I had a coworker for a while.

And, I can't forget dinner at T-Rex. This is usually a family favorite, but this evening- the wait for our table was a while, the service was slow and not very fun, and the food just meh. Kind of makes it easy to not be back for a while!

It was nice that Friday, July 3rd was a holiday. We took full advantage of it and went to Epcot for the day. Right out of the gate, we rode "the big ball" as Logan puts it, visited with some characters, and generally meandered around for the rest of the day. Dinner was back in the France part of the World Showcase at La Frenchy French Place. Dinner was OK. Not great, not bad. Poor Logan slept straight through it! But, while inside- it went from a little dark of a sky to a full-out rage of a storm. So we beat feet out of there.

And got back to the camper to a sad confirmation. A few nights earlier after a bad storm, I thought my CPAP mask strap was kind of wet. Tonight, I verified it- I had quite the steady dribble of water into the camper. Drat! I have video, but nothing good for photos. Oh well, it's fun to keep it interesting!

For July 4th, we decided on going to Hollywood Studios. Mandie and Karen worked out another visit between our two fulltime families. We had lunch, watched the Frozen Sing-a-long, and the kids + Steve rode Star Tours, We parted ways and the 4 of us went back to the Art of Animation drawing class. I'm sad that it's closing- that was kind of neat.

By Sunday, we were BEAT. We wanted to go to the waterpark but decided that a restful day at the pool was a better idea. The wild beast of a camper kept talking to us and we knew that we needed to sort out some organization, so we made a trip to IKEA. We got some much needed shelves, a rack for the kitchen, and some miscellaneous stuff. My rants about weight must have sunk in for Mandie because when choosing between white and wood-colored, she had us look up which weighed less (wood/pine won by a good 20 lbs.).

It was also a rough but lucky day for truck keys. First I jumped into the pool with my key fob in my pocket. That dried out and continued to work. Then at IKEA, I sat down on a chair and apparently my keys fell out of my pocket. We learned of it after the store closed as we were headed to take stuff to the truck. Mandie had to be escorted back through the store to find them. Otherwise, we were STUCK! (When she texted me that she found the keys, I was already on the phone with Good Sam's roadside assistance to figure out what to do.)

And finally, on Monday- we went to Disney's Typhoon Lagoon. I learned an important lesson about not sunscreening the day before. I don't need it on the parts that are used to getting sun; but the part of me that is typically covered by a shirt... yeah, sunscreen it! I was burnt heading into a day at the waterpark. We used the liquid blanket on all of us and, in a shocking twist for my family, even reapplied!

Typhoon Lagoon was fun. Their "wave pool" is really a surf pool. The wave comes out crashing at you with an amazing amount of force. Logan and I got creamed and he loved it. Unfortunately Mandie did too and skinned up her knee pretty painfully bad. We road a variety of raft rides and Logan thoroughly enjoyed the kid area because it gave him some freedom. 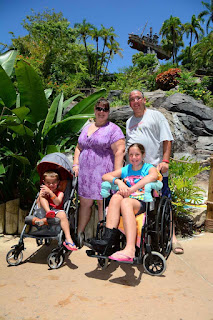 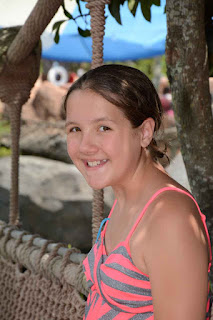 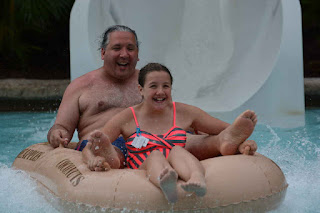 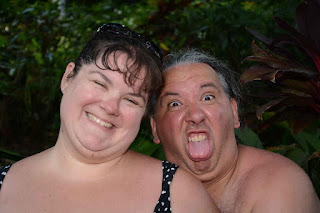 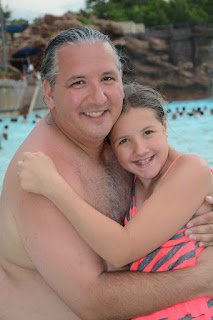 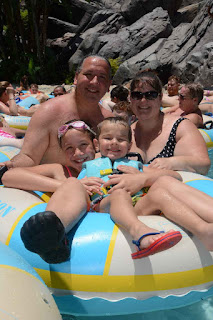 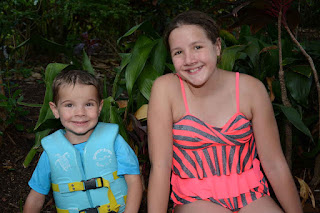 The next few days sort of run together. I know that Mandie assembled some of the IKEA furniture and started taming the beast that is our bunkhouse. (My "doomsday"-level prepping when it came to what tools and garage stuff to bring was vindicated when we needed the construction adhesive to fix a piece of trim. WIN!)

We had a RV repairman come visit us at Thousand Trails Orlando to fix the leak in the corner of the slide. Of course while he was there, he offered, "what else do you have for me?" and I had a whole list. He happily attacked each one. I'd hire Patrick Monahan again.

Paige and Mandie went on a date night to see Cirque du Soleil. Logan and I had some guy time- dinner, a walk to the playground and dumpster, and then some snuggles in bed watching TV.

Paige and I went on a date night to go to Disney Quest.

And GRANDMA got here! We had a busy weekend with Grandma - first up was dinner at Chef Mickey's and then watched fireworks from a balcony at the Contemporary.

(Don't judge- yes, I did go get a big plate and attempted to get one of every dessert item available.)

Saturday was a day at Blizzard Beach and that evening, Mandie and I took advantage of a sitter and went for our own date night (to Narcoossee's at the Grand Floridian- expensive but man-o-day was it good again!).

I caught the most beautiful picture of a sunset after dinner while we were catching up with Grandma and the kids.

And then it was packup and move day on Sunday. I want to blog separately about it, but we stopped for a weighing called an "individual wheel weights" weighing. It's done by Escapees and they call it their SmartWeigh. I'll explain more later.