I've started reading blogs of other fulltiming families. I just so happen to have joined a Fulltime Families group. Often one of the big challenges of hitting the road is you start with a house full of belongings and need to whittle it down to just what is going to live in the camper (and, in our case- what is going to live in storage each month). We want to "realistically minimize" what goes into the camper in order for it to not feel overwhelming to live there. We want to manage what goes into storage because that's expense (less stuff = less cost). And, I'm not alone - I was reading a post by Karen Church, she was talking about how to get started at purging and the difficulty that comes with it. Purging is hard to get started and frankly, pretty emotional- so many things that you come across tug on your heart strings. It is either a memory that it evokes or a plan that you wanted to do. The decision to not keep something is difficult!

Our daughter's school has a clothing collection box. It's a nice thing to know that we're giving the clothes to a charity, but it's also cool that the PTA gets proceeds from it. It's a do-gooder-double-whammy. Anything that we don't outright sell goes to the box. Check schools, churches, etc. for these donation boxes.

We've also collected school supplies to take into the school. And have some things earmarked for Goodwill or the Salvation Army. We even have a couple of things that would be useful at the hospital for the child-life folks.

Gifting is a slippery slope. We've been trying to balance giving someone something that we think would be useful (or fun) to them without unloading our crap on family and friends. I don't want to make my problem theirs.

I've also used the local Freecycle group a good bit. For instance, we replaced our microwave because the handle was sort of broken- I could see a renter breaking it off. It went to freecycle to someone who said theirs recently stopped working. My wife used a Facebook group to find a taker for our piano. Easy peasy and they come get the stuff! 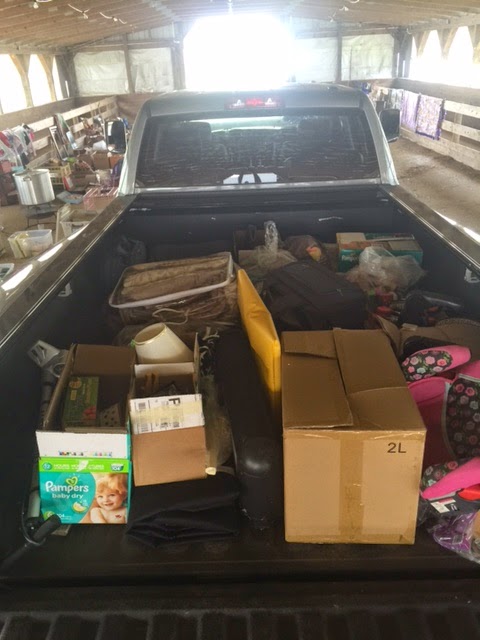 Having a yard sale isn't an option for us with the accelerated timeframe that we're on. But, this can be a good way to get stuff out. Instead, I turned to Craigslist and yard sale groups on Facebook. This has sort of worked, but has been fairly slow an annoying when people are no shows or reschedule 7,000 times. My cousin (who is a junk connoisseur buying things at flea markets and re-selling them online) suggested that I look at local auction houses. Often times you can drop stuff off and they sell it taking a commission. I just did this for the first time this past week and let me tell you- for a low work method of selling stuff, it was ideal. Stuff sold cheap, but I unloaded a truck load of stuff in a fairly low-work way. The few things that I didn't sell, I took straight to the dump. I'll receive a check later this week.

And, some things aren't worthy of the space that they take up. We recycle what we can, but what we can't has been bagged up for the garbage. Last week, we had close to 7 bags (sadly).
Posted by Doug S at 12:32 PM